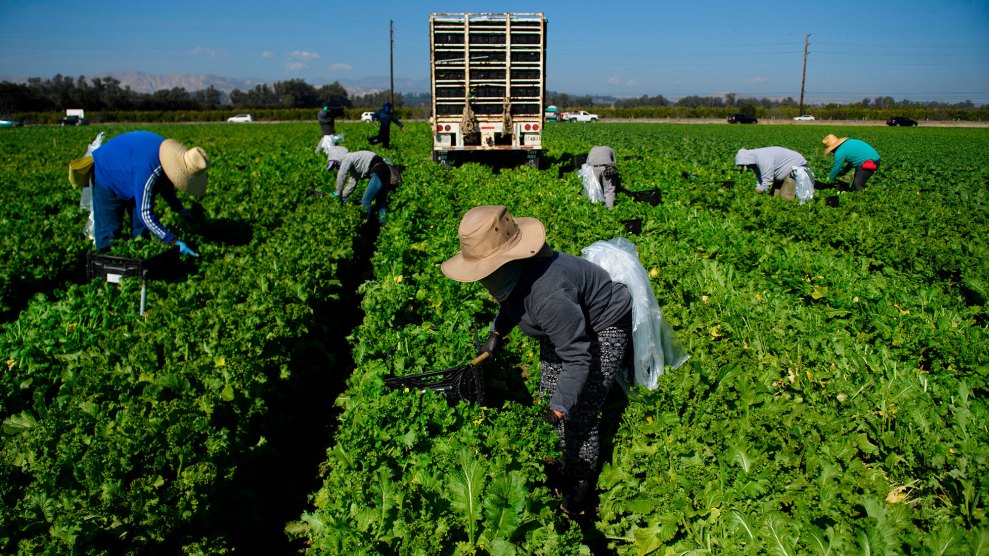 A year ago, when the coronavirus pandemic caused the shutdown of US consulates in Mexico, thousands of seasonal farmworkers were abruptly stranded in Monterrey. The sudden closure of the consulate there—where the largest number of H-2A visas in the world are issued, around one thousand a day during peak months—left US farms scrambling to figure out a solution; they had been relying on the Mexican workers to spend the next several months harvesting much of the produce we in the US eat every day.

The situation could have proved catastrophic—“without these workers, everything ceases to exist,” Diane Kurrle, senior vice president of the US Apple Association, told me last year—though the following month, the US government deemed all farmworkers “essential” and H-2A visa processing opened back up with changes to make it speedier.

“It can all really be summed up as a structural imbalance of power in favor of employers.”

But while these workers were recognized as essential—and they kept our food supply steady during a pandemic and extreme weather—they have been and continue to be incredibly vulnerable and, ultimately, overlooked. In fact, as Democrats move to champion essential workers with relief packages and legislation that plans to give citizenship to other farmworkers, this class of laborers is simply left out of discussions regarding permanent legal status. This is happening as the US has grown more and more reliant on temporary farm workers, mostly from Mexico. Even in a pandemic year, the number of temporary agriculture worker visas was at an all time high, with more than 213,000 issued in 2020. Although technically seasonal, many of these workers end up spending up to nine months of the year working in the United States, year after year. And during that time they’re often exposed to wage theft, overcrowded or unsanitary housing, and predatory recruiters.

Last week I caught up with with Evy Peña, the communications and development director of the Mexico-based NGO Centro de los Derechos del Migrante, about the increasingly dire state for temporary visa holders, the ways in which the pandemic has highlighted the many inequities in the program, and how to balance the hope for certain workers with the precarious future of the migrant labor system. The conversation below has been condensed and edited for clarity.

At the very beginning of the pandemic, thousands of H-2A workers got stuck in Mexico, most of them in Monterrey, where the US consulate normally issues their temporary visas. What’s the status of H-2A workers and visas now?

We’ve seen a definite increase in the number of H-2A workers who are going to work in the United States because they have been deemed essential and there have been some administrative changes throughout this year in regards to how their visas are processed. But in terms of their working conditions and recruitment conditions, unfortunately not much has changed. If anything, they’ve gotten worse.

“The focus tends to be on how to expand these programs to meet industry demands rather than strengthening protections for the workers who are sustaining these industries.”

Another thing that we’ve seen is an increase in the amount that workers are paying to work in the US. As you know, recruitment fees are illegal in the US and in Mexico, but because of the lack of oversight, it’s very common for recruiters in Mexico to charge exorbitant fees in exchange for the opportunity to work in the US. Since COVID, we’ve heard from several groups of workers who are being asked to pay literally thousands of dollars, and also to pay for medical exams to confirm that they don’t have COVID, as part of the recruitment process. So, obviously, this only increases the amount that workers have to pay. They often need to incur debt in order to pay for these fees upfront, which means that when they arrive at their workplaces, it’s unlikely they would report abuse for fear of being fired or retaliated against, which would mean they would go back to their home communities unable to pay these debts.

The pandemic has shed light on the inequities in so many industries, between documented and undocumented, and for people of color. What has the pandemic highlighted for H-2A workers in particular?

I think everything overlaps, because in a way, the abuse that we’re seeing during the last year is just a reflection of how these programs are structurally flawed and really foster inequities between migrant workers. It comes down to the fact that workers lack labor mobility. If they report abuse, they will get fired and maybe never be able to access the program again. The pandemic has also exacerbated the amount of discrimination that we’re seeing against women who are being left out of opportunities to access this program. But we’re also seeing anecdotally that employers are choosing to hire more indigenous workers, mostly because of the lack of access to information about their rights in a language they understand. Along with that, it’s more difficult for them to find a lawyer who’d represent them if they needed it.

It can all really be summed up as a structural imbalance of power in favor of employers. The population of workers with H-2A visas is increasing, but their protections are not being strengthened.

We recently saw Democratic lawmakers introduce a bill in Congress that would give a path to citizenship to frontline workers who don’t have permanent legal status in the United States and who have gotten us through the pandemic in different industries, including domestic, janitorial, and food.

But these efforts don’t include foreign workers who come here with temporary visas, like H-2A farmworkers, even though they were out in the fields, rain or shine, pandemic or not. [Ed. note: Biden’s comprehensive immigration reform bill does include H-2A visa holders in its plan for green cards, but passing that bill will be a herculean task. Another recently introduced bill, the Farm Workforce Modernization Act, calls for changes to the H-2A visa program, but doesn’t offer a path to legalization.] So, what are your thoughts on some relief bills leaving out H-2A workers?

“It’s as if labor mobility was a privilege instead of a right.”

H-2A workers—and, more broadly, migrant workers across temporary visas—are often left out of these issues. Policymakers regularly operate under the assumption that these programs provide adequate protections for migrant workers. This couldn’t be further from the stories we hear from thousands of migrant workers. Much like the Bracero program, current temporary labor migration programs are mischaracterized as the ideal solution to labor shortages without accounting for the egregious labor violations that workers face every day. The focus tends to be on how to expand these programs to meet industry demands rather than strengthening protections for the workers who are sustaining these industries. Any model that prioritizes workers, families, and communities should provide access to a pathway to citizenship and promote family unity. The current system is based on family separation since it is virtually impossible for people to migrate as a family.

From my reporting, I can see farm owners or big agricultural companies who wouldn’t want to have their H-2A workers have permanent status—because it could mean they could move on to other jobs, maybe other less physically demanding jobs, or just flat out leave the company if the conditions aren’t good. Right now many workers have to keep their heads down, even if their experience is terrible, because of their conditional status. So I’m just hypothesizing that giving a green card to H-2A workers, even if they’ve been coming to the US a certain amount of years, wouldn’t be received very well by some some of the employers.

It’s part of why these programs are so fundamentally flawed. Without access to a pathway to citizenship, and without labor mobility, it just means that workers are very likely to suffer abuse and and it goes back to what we were talking about: the fundamental imbalance of power in favor of employers. So these programs sort of create double standards for migrant workers.

It’s as if labor mobility was a privilege instead of a right. Every single person should be able to change jobs because otherwise there’s no incentive for employers to comply with the laws, especially with the lack of oversight from the Department of Labor. If workers were able to switch jobs and actually choose the condition that they wanted to work in, the places where they wanted to work, for the employers that they wanted to work for, the balance of power would be shifted. And it could be expected that some employers would not like that. But that is part of why the temporary visa programs are so fundamentally flawed, because they’re built almost on this idea that migrant farmworkers are supposed to be dependent on employers.

Earlier this month Mexico’s President Andrés Manuel López Obrador brought up the idea of working with President Joe Biden on a new guest worker program inspired by the Bracero program, a bilateral agreement first signed after a labor shortage in the United States following World War II, which lasted for about two decades. We know that there were many issues with the Bracero program and that both countries took advantage of many workers—Mexico especially, keeping some of the money owed to the workers for decades.

So what’s your reaction to hearing AMLO’s plan, which would bring half a million temporary workers from Mexico and Central America to the US under a plan similar to the Bracero program?

“Temporary visa programs are so fundamentally flawed. They’re built almost on this idea that migrant farmworkers are supposed to be dependent on employers.”

First, I’ll point out that  during the same speech in which AMLO said that he would propose a Bracero-like program, he also talked about respecting the human rights of migrant workers, and really these two concepts are contradictory. The use of a Bracero program has deeply racist and exploitative roots, and, as you were mentioning, abuse was pervasive for workers in the program. Plus, the Bracero program was also the inspiration for the temporary visa programs that we have today, which are based on meeting employer demands without respecting workers rights, so it’s really no surprise that workers on these visas face systemic abuse. It is a cause for alarm that this would be the starting point for a new labor migration program. AMLO referenced the “strength and youth” of Mexican workers as one of the reasons why the US needs this sort of program, and I think there’s a discrimination aspect towards older workers that is implied there and also towards women.

Instead of looking to a solution where we put the human rights of workers first, it’s really alarming that AMLO would propose looking to the past to a flawed and deeply racist program that undermined the rights of Mexican people. In the end, both countries are very dependent on labor of H-2A workers: Mexico, because of remittances; the US, obviously, because of meeting labor shortages and sustaining its essential industries. I think both presidents have expressed their commitment to uplift labor rights and to uplift the rights of migrant workers in different ways, so if both  governments are willing to prioritize the voices and experiences of migrant workers, it really could be an opportunity to advance an alternative model.