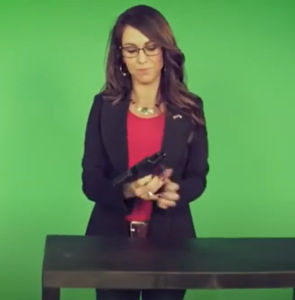 Fox News’ Brittany De Lea reports that Rep. Lauren Boebert of Colorado is all over the deadly vehicular attack last Friday  on U.S. Capitol Police that left one officer as well as the mentally ill sole perpetrator dead–or more to the point, all over the blame game for the attack:

Rep. Lauren Boebert, R-Colo., questioned whether the FBI and Department of Homeland Security were – or should have been – aware that the suspect who attacked Capitol Hill on Friday may have been a threat, or whether the agencies had been distracted by “woke training”…

The suspect, who has been identified as a 25-year-old man from Indiana named Noah Green, rammed a barricade at the Capitol on Friday in his car, killing Capitol Police officer William Evans and injuring a second officer. The suspect is said to have exited his vehicle with a knife and lunged at officers. The suspect, who was shot, also died on Friday.

It appeared to be a “lone wolf” attack, sources told Fox News, and the suspect identified himself as a follower of the Nation of Islam on Facebook.

To be as fair as possible, we’ll acknowledge that Rep. Boebert did offer condolences to the fallen Capitol Police officer before pivoting to whether the police were “too busy doing woke training” to (we guess) not die:

My heart breaks for the Capitol Police and those that knew the officer we lost today. This senseless violence has to end. Our country is in great need of unity. 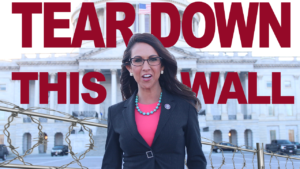 Friday’s fatal attack on a vehicle barrier near the U.S. Capitol comes after Boebert filmed a promotional video in March of herself walking the perimeter of the razor-wire fence erected around the building after the storming of the Capitol by pro-Donald Trump insurgents on January 6th. “Madam Speaker, tear down this wall,” said Boebert in that video, invoking Ronald Reagan in Berlin–and on March 24, the fence came down. Boebert wasn’t the reason the fence came down, though she would have gladly taken credit for it except perhaps for a brief period last Friday afternoon.

Given Boebert’s high-profile role in the post-election agitation that led directly to the riot on January 6th at the U.S. Capitol, both Boebert’s grandstanding for the Capitol fence to be removed before security considerations permitted it as well as Boebert’s intense focus on this one attacker over the hundreds who stormed the Capitol on Trump’s behalf go beyond hypocrisy into something closer to what psychologists call “gaslighting.” The goal is not so much to convince her critics, but to simply confound them in apoplectic rage over a pretense no one, not even Boebert herself, actually believes.

Although any reasonable person would have realized either on January 6th or immediately afterward that it was time to shut up get out of the spotlight until the dust settles, Boebert’s strategy is the opposite: a frontal assault of hypocrisy in the hope that the resulting wreckage will be unrecognizable.

Like Trump, folks. She learned this from Donald Trump. And on her smaller scale, Boebert is heading to the same end.