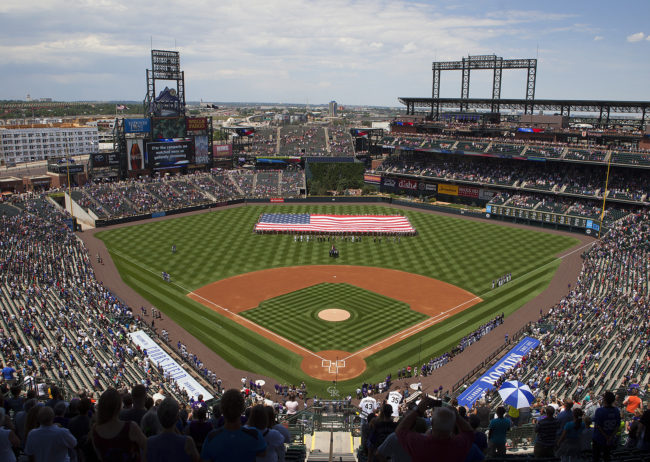 We’re still getting our heads around the whirlwind events of the last four days, after Major League Baseball announced last Friday afternoon that the 2021 All Star Game would relocate from the state of Georgia after that state’s passage of highly controversial vote suppression laws in response to statewide Democratic victories in the 2020 elections. Gov. Jared Polis of Colorado immediately swung into action following this announcement to sell Denver’s Coors Field as an alternate location for the economically lucrative event, and yesterday evening the news broke that the Midsummer Classic would be played in Colorado for the first time since 1998.

Like we said yesterday morning, Colorado has one of the most accessible and modern election systems in the country, and the result has been consistently high rates of voter participation ever since the new system was enacted in 2013. Colorado sends mail ballots to every active voter, allows same-day voter registration, and allows collection and drop-off of a limited number of completed ballots at drop boxes across the state.

Basically, we do everything Donald Trump claims “rigged the election” against him in 2020 as standard practice in Colorado. The problem is, well, there’s no problem–our years of experience has proven that these reforms actually do work. More voters vote, elections are accurate and secure, and Republicans even occasionally win in a state whose political trajectory has been moving Democratic for years. In the aftermath of the 2020 presidential election, as Trump was insisting that he rightfully won re-election, even Colorado Republican leaders like ex-chairman Rep. Ken Buck and GOP county clerks worked to debunk the nonsensical claims of Trump’s conspiracy theorists with respect to Colorado elections. And since Colorado relies on the very same Dominion Voting Systems hardware and other practices Trump had seized on to allege fraud, this means Colorado Republicans were, for anyone paying attention, effectively dismantling Trump’s falsehoods everywhere.

As Westword’s Michael Roberts reports, this important leadership role for Colorado in refuting nationwide false narratives about how elections work put our state in a position to prosper bigly at Georgia’s expense–while continuing to strike directly at the Big Lie:

The Georgia law is one of the most draconian in the country — opponents argue that it will disenfranchise people of color by adding new restrictions to mail-in ballots and voter registration — and the response has been just as drastic. In addition to MLB’s move, other major outfits are pulling big events from the state, particularly Atlanta.

But the loss of the All-Star Game particularly hurts. When Atlanta hosted this event in 2000, it got a $49 billion economic boost, according to Baseball Almanac. This year’s game was estimated to bring another $100 million to the city…

Dominion Voting Systems, the Denver-based company that’s been the focus of most of those unfounded election-fraud rumors across the country, particularly Georgia, is headquartered only blocks from Coors Field (not that employees are working in that building these days). Moving the game here is a political home run for free and fair elections, as well as Denver’s economy.

It’s been suggested that the passage of draconian vote suppression laws in Georgia could backfire on Republicans in another way, by mobilizing their opponents to work that much harder. At the same time, moving the All Star Game to Colorado forces Republicans to acknowledge our state’s success. The first response we’re seeing from Republican spin machines is not good, trying to advance an absurd narrative that Colorado’s election laws are somehow more strict than Georgia’s by comparing early voting days (15 vs 17)–and totally ignoring fundamental differences like all-mail ballots and same-day voter registration:

The reality is much more nuanced. When it comes to picking a state that makes voting accessible — and provably so — it’s very difficult to do much better than Colorado…Yes, Colorado has slightly fewer [in-person early voting days] than Georgia will have. But given how few people use that option and how accessible mail-in voting is, it’s incontrovertible that it’s easier to vote in Colorado.

The simple fact is this: Colorado’s success in increasing voter participation securely exposes vote suppression in other states for what it is. Colorado’s model election system is a major dilemma for Republicans bent on suppressing the vote in their own states. Bringing the All Star Game here to highlight this reality, to celebrate our success in contrast to what’s happening in so many other states, is a political masterstroke that will resonate beyond Colorado’s four corners.

For some Colorado Republicans and plenty more elsewhere, however, it’s going to be an awkward few days.